The True Odds of Winning Lotto - MUST READ!

The Lotto Odds Calculator on this website explains that it is not what the individual numbers are, but whether a match is made with the draw's random sequence of numbers. The calculator provides the actual true mathematical odds and expected return, given any particular, part or whole sequence match with the draw.

In Australian lotto, every number has an equal chance of being drawn. The science of mathematics states that we cannot predict a sequence of numbers based on past draws.

The calculator admirably shows that paying for more games through Standard, QuickPick or System games only improves the odds by one and the only way of greatly improving the chances of a win is unique to Australian lotto through Pick and Powerhit entries.

When lotto was established in 1900 in Tasmania, George Adams agreed with the then Government, who was lobbied by the Thoroughbred and Dog Racing Industries, to incorporate a 'Play the Field bet (entry)' in all lotto draws. This was a legislated agreement for all future lotto draws. It was an attempt by the powerful lobbyists to keep George out of 'their patch' because they didn't think he could have a Play the Field entry with lotto. Clever George called these a 'Pick' entry. It was called a 'Power Hit' on the Powerball Thursday draw and a 'Pick 6' on the Tuesday Ozlotto, when they were established in the early 1990s - to satisfy the original lotto legislation.

The following information, based on a Monday, Wednesday or Saturday draw (6 from 45), provides Lotto players further clarification to better understand how the odds are greatly improved with a 'Pick' entry. Simply click on each heading to reveal the answers.

What are Standard, QuickPick and System games?

There are 8,145,060 different number combinations along this line for the lotto barrel to choose from. You only choose a few of them!

If you buy 10 games you have a 1 in 8,145,050 chance (only 10 less) of matching the 6 numbers of the draw and you still have only a 1 in 494 chance of winning something. They are the odds you are spending your hard earned cash on! No wonder why most people don't win anything!

System games generate multiple games along this line with a common set of numbers. For example, a System 20 game (where a punter asks The Lott computer to make as many 6 number games from those 20 numbers) costs $27,789.00 by selecting 38,329 of the different 6 number combinations from the 20 numbers along this line – leaving 8,106,731 other combinations for the lotto barrel to choose. There are another 25 numbers that are not represented in any of the 38,329 System 20 games!

After spending $27,789.00, the uneducated punter cannot understand how those 38,329 games only return less than 6% of the cost if they are lucky. That means, without winning first division (a 1:8,106,731 chance) and winning a few of the lesser divisions, the uneducated punter donates $2,696 to the lotto outlet and $23,426 to the State Government and The Lott.

Next time you're passing a lotto outlet, have a look at the range of syndicates they have on offer – they are mainly made up of System games!

What are Pick 5 entries (Monday, Wednesday and Saturday Lotto)? 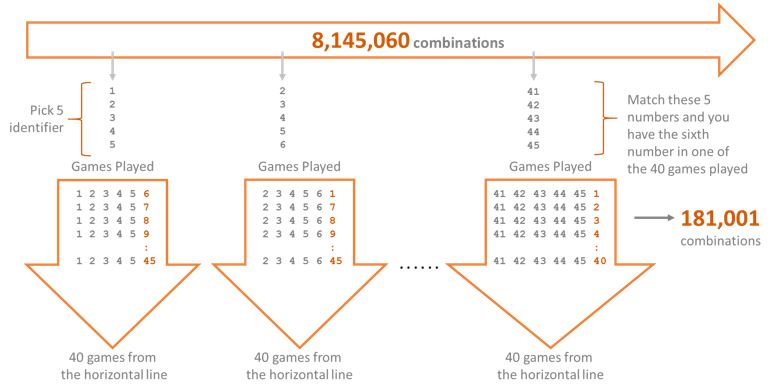 With Pick 5 games you only have to choose 5 numbers - not 6. Pick 5 entries generate 181,001 vertical lines each consisting of 40 games from the horizontal line. Each vertical line is identified by the 5 numbers selected – the 40 games on each vertical line are generated by The Lott’s computer by adding a sixth number not represented in the five numbers.

This means the educated punter who purchases a single Pick 5 entry, costing less than $30.00 with its 40 games, has a 45 times better chance of winning first division than someone who spends $27,789.00 to generate 38,329 games with a systems game.

Further, the odds of winning first division, even with a Pick 5 entry, is still ‘way out there’. It is pertinent to realise that spending more than $20.00 every week of your hard earned cash does not really satisfy the pub test. Smart lotto punters, who are now educated with the odds, should realise that to have a chance at really winning (wins less money spent = >1), the weekly cost should be something affordable for them. This is done by sharing the cost with others.

Having an interest in multiple Pick entries does not pass the pub test either since it does not improve the odds (5 pick entries only gives you a 1:180,996 chance (5 less) in the Monday, Wednesday and Saturday draws).

Lotto outlets cannot offer syndicates with single Pick games because they make commission on every game sold. They are not going to tell you that you have a 45 times better chance of winning if you spend less than $5.00!

What are Pick 6 entries (Tuesday Ozlotto)?

What are Powerhit entries (Thursday Powerball)?

To further identify the odds of Powerball, if someone takes out a Pick 5 Powerhit where you only have to match 5 numbers (not 7) in the first barrel to win 1st division - this will cost AU$10,555.70 BUT it only gives 1 in 11,311 chance of winning 1st division. Who has that kind of money for those odds for one draw?

The AusLottoGroup.com website is the only legal, accepted (since 2011), affordable, copyrighted, legal and guaranteed method of taking advantage of play-the-field (Pick and Powerhit) entries in Australian Lotto. Australian lotto is the only one in the world that offers these entries.

We purchase multiple Pick and Powerhit entries and allocate them to syndicates with 15 shares; you join the membership and get allocated to a syndicate; your personal login identifies the syndicate and its numbers (maintained for the duration of your membership) and other interactive information; you receive detailed unique reports after every draw which identifies what syndicates have won; AND you have access to a help desk 24/7. AusLottoGroup distributes 100% of all wins to the shareholders of each syndicate.

After the initial AU$5 joining fee, members pay their ‘participation cost' (Membership cost LESS wins LESS referrals (members who join and enter your email as the referrer – you receive AU$5 every month while they remain members)).

There is a small admin fee in the price of your membership to cover costs of providing unique reporting and other services. It still only costs you less than AU$5 per draw to take advantage of the Pick and Powerhit entries.

What can I learn next?

Now you understand how the science of Lotto odds work, please read on and learn in more detail how you can benefit from becoming a AusLottoGroup member. Clicking on highlighted text and the above menu bar will provide shortcuts to other pages so you are fully informed. We have not held back with any information!

All odds supplied here are the best odds of a particular outcome. When using the Lotto Odds Calculator these odds can be noted by filling the selection on a given draw from the right.

Share the cost of the more expensive entry types by playing in an AusLottoGroup lotto syndicate each week. The Pick5, Pick6 and PowerHit20 entries that AusLottoGroup members play have better odds of winning and higher prize amounts than standard, quickpick and system game enties. Play lotto the smart way ...

AusLottoGroup allows you to have single or multiple shares in one or more of our syndicates with guaranteed better odds to win than standard games, quickpick games, system games, or other syndicates that you can purchase from any one of the 4000 lotto outlets or online elsewhere in Australia.

All AusLottoGroup syndicate members have a private member account which provides access to Lotto results and comprehensive financial transaction reporting. Ongoing membership is paid automatically via Credit Card at the end of each month.

AusLottoGroup communicates draw results and associated winnings directly to syndicate members via email. All draw results contain an in-depth analysis of the results.

We have a great referral program which allows AusLottoGroup members to reduce their ongoing membership costs with every active member they refer into the group. You get $5.00 per referral per month ongoing. With enough referrals you can end up playing lotto at little or no cost.

Bronze Members receive wins from an AusLottoGroup lotto syndicate which has just 15 shares of a Pick5 entry in Tattslotto each Saturday. Pick5 entries have MUCH better odds of winning compared with standard, quickpick or system games and guarantees each Bronze member a much bigger return for just $5 per week per share (LESS any minor wins and LESS referral credits).

Silver Members receive wins from an AusLottoGroup lotto syndicate which has just 15 shares of a PowerHit20 entry in Thursday Powerball and a Pick5 entry in Saturday Tattslotto. Both PowerHit20 and Pick5 entries GREATLY improve the odds of winning and win more than standard, quickpick or system games therefore guaranteeing Silver members a bigger return on 2 nights a week for just $10 per week per share (LESS any minor wins and LESS referral credits).

Gold Members receive wins from an AusLottoGroup lotto syndicate which has just 15 shares of a Pick6 entry in Tuesday OzLotto, a PowerHit20 entry in Thursday Powerball and a Pick5 entry in Saturday Tattslotto. Pick6, PowerHit20 and Pick5 entries GREATLY improve the odds of winning and win more than standard, quickpick or system games therefore guaranteeing Gold members a bigger return on 3 nights a week for just $15 per week per share (LESS any minor wins and LESS referral credits).

Platinum Members receive wins from an AusLottoGroup lotto syndicate which has just 15 shares of a Pick5 entry in Monday Lotto, Pick6 entry in Tuesday OzLotto, Pick5 entry in Wednesday Lotto, PowerHit20 entry in Thursday Powerball and a Pick5 entry in Saturday Tattslotto. Apart from Pick and PowerHit entries winning HEAPS more than standard, quickpick or system games, Platinum members have improved odds of winning a division one prize for just $20 per week per share (LESS any minor wins and LESS referral credits).

"This is the BEST Lotto System in the world. I am so excited to be part of this rapidly growing membership. It is so affordable after wins and referrals, while we await the BIG win"!

"I have been a lotto player since the auslotto group was formed a number of years ago. I have found the organization and members advocate to be well organized and prompt with results. The best way to describe my experiences is that it is very much like fishing, regular bites and nibbles, just waiting for the big catch to come along. You have to be in it to win it".

"I have been in the lotto group now for a number of years. Although I have not had much luck in winning it is great fun and a cheap way to play Lotto".

"G'day all, my name is Rodney Santos and I have been a proud Gold member of ALGMO, now AusLottoGroup, since 2011 and am very satisfied for playing the Australian Lotto games smarter and as a syndicate member. Grenville, Bev and Team have always been very understanding and flexible in the managing my fiscal and banking procedures with the group. I highly recommend any level of the AusLottoGroup membership for everyone that would like to play Lotto smarter; with better chances and very informative reports on results and draws".

This AusLottoGroup membership is about giving you the best chance of winning Lotto and minimising your cost while you wait for the big one.

By playing Pick and PowerHit entries through the AusLottoGroup membership we guarantee you win more and more often than buying your own games!

On top of that - we are sure you would like to win Lotto without it costing you anything!!!! Members you refer can be paying for your membership every month!

Refer lotto players to this website and ask them to enter your email address as the referee. We pay you $5 a month for every one of your referred members instead of paying some advertising company. It doesn’t take many referrals to pay for your membership! How easy is that?